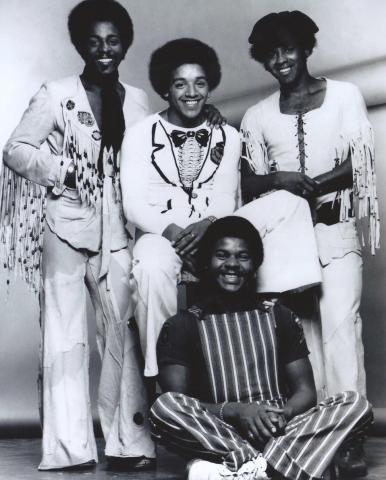 On the 2nd of Feb 2018 I received a message on Twitter from ‘The Real Thing’, (Eddy, Chris and Dave), after I posted the video for our new single ‘Pop Don’t Stop’, it said: ‘Fabulous Kim Wilde, she’s an icon of British Music, Lovin’ this Kim! British music, you and Ricky ‘have done good’.

I was very touched that a band I so admired had so much pride in my success and that of my brother Ricky. I feel our Liverpool connection has something to do with the bond that exists between us, our mother Joyce Baker came from Huyton close to Toxteth where the band grew up, so Ricky and I are proudly half ‘Scousers’!

‘The Real Thing’ and I go back a long way to a gig they did in my hometown of Welwyn Garden City back in the 70’s.This was one of the first gigs that my best friend Clare and I had ever been to, and we still have the signed photo they gave us after the show…they were fantastic! Back in 1977 I was just 17, and songs like ‘You To Me Are Everything’, ‘You’ll Never Know What You’re Missing’ and ‘Can’t Get By Without You’ were among the songs that formed the sound track to my teenage life, first date, first kiss, and first heartbreak. I was honored recently to contribute to a documentary about the band; theirs is a music business fairy tale story, but with great sadness too with the loss of Ray Lake in 2000, and now Eddy Amoo. Now the story goes on with out Ray and Eddy, as Chris and Dave start their upcoming 2018 tour, keeping their wonderful songs alive to an audience who will always, like me, have a special place for ‘The Real Thing’ forever in their hearts.